Pancakes and fruit smoothies! It’s a Sunday indulgence kind of day for me as I sit here in my pyjamas with a mud mask on my face and eat and write, and then eat some more. What’s everyone up to this weekend?

Having recently come back from a fun filled weekend in Amsterdam I’m super excited to share it with you all. A town most commonly known for its red light district and legal cannabis, a visit to Amsterdam’s beautiful streets and winding canals will show you that it has so much more to offer.

Known as the largest tulip festival in the world, this had been on my bucket list for years and I was so excited to be finally ticking it off! We landed at Schiphol Airport around ten in the morning and from the airport caught a bus direct to the gardens. There was a slight queue for boarding the bus (about 15mins wait), however this was nothing compared to when the bus dropped us back at the airport around midday. The length of the queue was insane! And the estimated waiting time was around three hours!!! So if you’re planning a visit, my advice is to get there as early in the morning as possible.

The queue at the gardens itself didn’t take long as we had pre-purchased our tickets, so we were inside and free to roam around within minutes.

The tulips were beautiful, and had bloomed just the right amount that we were able to get the full effect. Each section catered to a different colour scheme and being a beautiful spring day, it made the experience that much better.

We stayed a total of two hours and that was enough time in my opinion. There wasn’t an open field of tulips where you could walk down and immerse yourself in. I mean we did see this, but it was across a river with no visitor acccess. What we were able to see up close in person were various areas roped off so visitors could merely look without touching. For what I was expecting, it was a lot more touristy than I had imagined.  I didn’t get the feel of being in an open field surrounded by nature or in this case tulips. It felt more like an open museum of tulips. Based on this, I think next spring I’ll opt for a lesser known tulip location, in hopes of getting a more authentic experience. 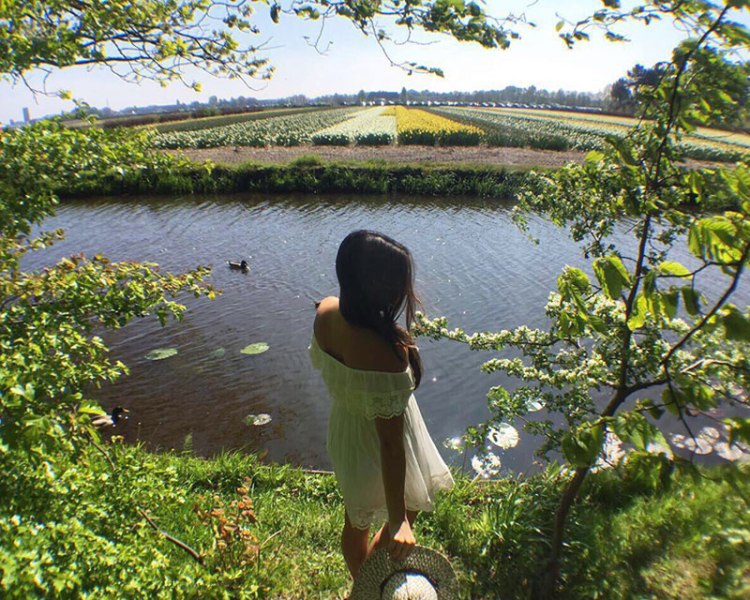 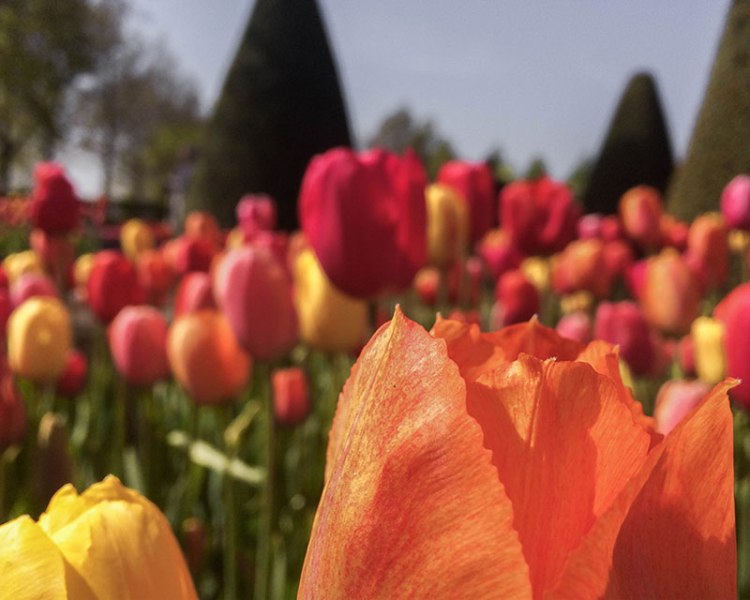 Day One… getting around, Ann Frank House, Jordaan and IAMSTERDAM

Tulip gardens now ticked off our list, we had the rest of the day to explore. Making our way out of Amsterdam Centraal Station I was immediately hit with a unique blend of rich history and a modern vibe. Not to mention the gingerbread style houses that are just too cute for words.

As we watched cyclists tactfully navigate their way through the streets, avoiding crowds of tourists every few seconds, Luca and I opted to take a more traditional route and walk around the city. The biking culture here is on another level and when you see a mother cycling with three kids attached, you know you’re not in Cansas anymore. But if you’re a good cyclist and want to feel more like a local then there’s plenty of places where you can rent a bike for cheap. Which I definitely think I’ll do on my next visit.

The first stop on our list was the iconic IAmsterdam sign. We arrived around 1pm and oh my god, it was total chaos! People were everywhere, climbing and jumping all over the sign for that perfect Instagram picture. No wonder there were medics stationed close by. I’m not sure if it’s that busy all hours of the day, but just saying, be prepared!

Having not eaten since 6am (our usual pre flight breakfast at Pret) we were in search of a nice relaxing cafe with a view. So off to the area of Jordaan we went. Known for its multitude of cafés, restaurants and bars, and of course, live music on every corner, it’s not hard to see why it’s been voted the most popular area in the Netherlands.

We had heard of a place called The Avocado Show and being a nice sunny day, and purely based on the fact we both love us some avo, we decided to walk the 30min distance from where we were in Jordaan. This place accepts card only and it’s a first come, first serve basis, so no reservations here. We were lucky and got straight in and when our food arrived, all I can say is yum, yum, yum! And super healthy too! Walking that extra 30mins was definitely worth it.

With our bellies now full, it was off to some of the more historical sites of Amsterdam. One place in particular, Ann Franks House. Now it’s not a place that makes you feel good, I absolutely had tears running down my face as I imagined what her and others at the time had to go through, but it’s a piece of history that’s worth seeing.

As soon as we crossed that canal and entered the red light district, it was cameras away and phones in our pockets. It’s not a place you want to be photographing out of respect for the workers, and also I’m pretty sure it’s illegal! But I mean, we all know what goes on in the area, we don’t really need to be documenting it in photos. I found it super fascinating though, to watch the women make eye contact with tourists that walked by, giving them smouldering eyes and intent smiles. Tactically louring their next customer inside. I made sure I never looked too long though. Apparently a lingering stare can see you paying a hefty amount. I’m not sure how much truth there is to that, but I didn’t want to test the theory. 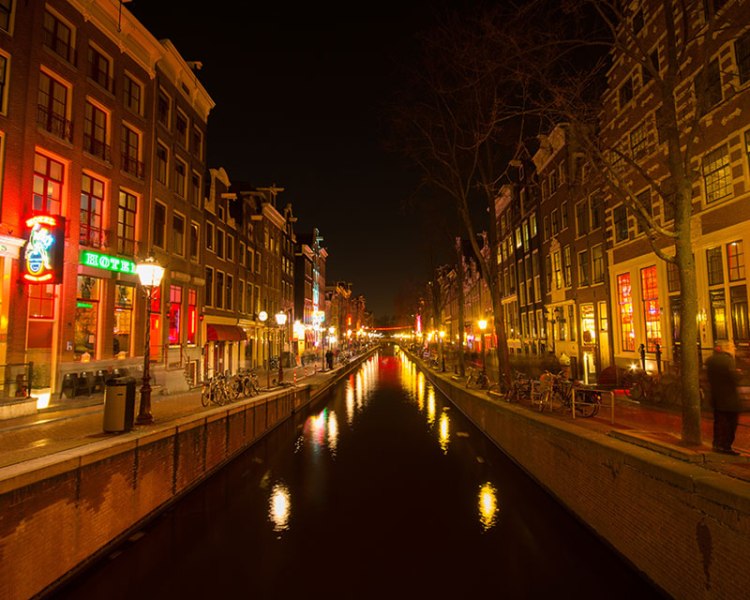 Because we were visiting in tulip season, accommodation prices in the centre of Amsterdam were unbelievably high. So we chose to stay at the Park Hyatt. They provide a free shuttle bus service to the airport, so we got up early took that, followed by a quick train ride from the airport into the city centre.

Then it was off to Pancakehouse for breakfast! It looks like a quaint little place from the outside, but when you enter it goes on and on. Busy is an understatement, but the staff are incredibly efficient and it wasn’t long until I was in sugar heaven. Or in Luca’s case, savoury heaven.

Needing to burn of those pancake calories, we started our walk to the area known as De Pjip. The complete opposite to Amsterdam’s canal district but just as beautiful. As we walked the streets, we noticed that quite a few houses had park style benches out the front. After chatting to a local, we discovered that the original idea behind this was to turn the streets into one large outdoor sitting room. A place for people to get to know their neighbours, have outdoor tea parties, etc. Such a great idea in my opinion. We even saw the cutest old lady sitting on a bench, pencil and notebook in hand, sketching an image of the tree lined street surrounding her.

Being tulip season, a visit to the flower market area was a must. Stalls upon stalls, selling everything from tulip bulbs and tulips, to fresh food, souvenirs and items for the home. We didn’t purchase anything but it was nice to just walk and explore and being amongst the bustling vibe of the area.

For the afternoon we wanted to go somewhere where we could soak up the sun, people watch and have a nice little lunch. Vondelpark seemed like the perfect place for this, and it was only a 25min walk away. We stopped every so often to take pictures and admire the architecture of the buildings, so I’d say we got there in about 40mins.

Finding a nice quiet spot by the lake we made ourselves a little picnic with local produce we’d picked up earlier during the day and got some much needed vitam d. 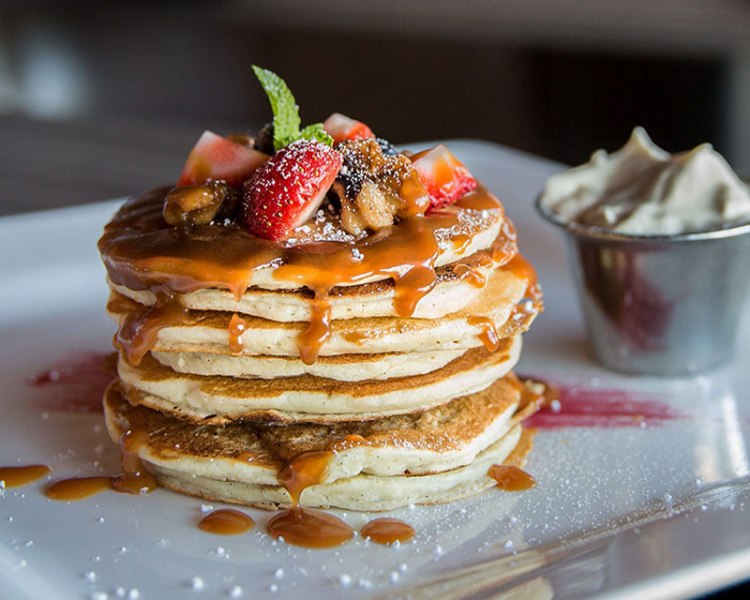 Departure… back to London

Our flight back to London was late Sunday night and even though we were only in Amsterdam for two days, we packed a lot in so it felt like much longer. There’s so much more we could have seen and done but we wanted to ensure our time was balanced between exploring and relaxing, which I think we achieved. I’m definitely keen to visit Amsterdam again, I feel like it’s a city you could go back to over and over and always discover something new.

20 thoughts on “Travelling To Amsterdam For Tulip Season”